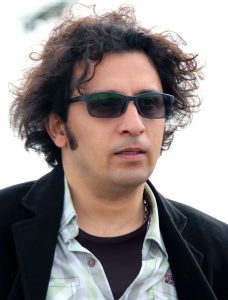 I Farzad Khoshdast was born in Mashhad on 28th of June 1978.

The city of Mashhad is one of the most important religious centers in the world of Islam for the 8th Imam of Shiites Muslims has been martyred in this city and his holy shrine is visited by millions of pilgrims each year.

This city is located in northeastern of Iran’s Khorasan province that has a long historical background and many famous poets of Iran come for instance the Persian language father Ferdowsi, Khayyam and Attar are from this province.

From the eastern mysticism’s point of view, the city of Mashhad has many thinkers who have shaped the theories and practices in this field as well as the political and social issues.

Discussions and activities around the political uprisings in the 1960s and 1970s by oppositions of Pahlavi Dynasty which led to the Islamic Revolution in 1979 were started there.

From my early childhood, I was exposed to art by my late grandfather Shokrolah Khoshdast who was one of the most influential architects of the past century. He was born in Kashan.

From the age of seven went to Mashhad and his geniality was discovered early and had designed and rebuilt many spaces of the shrine of Imam Reza the 8th Imam of Muslims as well as the monument of Khayyam and many other architectural artworks.

Andre Godard the French Oriental researcher has mentioned his name and his artworks are presented in the Berlin and London’s museums.

I learn drawing and painting from my grandfather and my love for art began from that time. At the age of 13 I started to act in professional theater and at 14 I made my first super8 film called “How hard is to fly”. I went to art school and studied architecture for two years and then studied graphic design for two years. And finally studied Cinema at the Iran Cinema Institute.

Accidentally I met the late Abbas Kiarostami at a film office when he was in the pre-production phase of his film “Taste of Cherry”. We talk about cinema and he gave me his phone number and our friendship began. I was present when he was editing “Taste of Cherry” and learned about different aspects of cinema from him.

Until now I have made several documentary and feature films and even though the economic situation of independent filmmakers are not satisfactory I continued to pursue my craft and at the age of 40 my point of view has been developed and am able to create images that talk to the world.